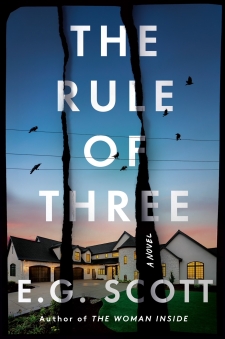 The Rule of Three
From E. G. Scott, the utterly gripping tale of three couples whose game night goes horribly wrong. Full of twists and turns that you'll never see coming, this is the summer read you won't be able to put down.

Once a week, three women get together for book club in Kingsland, a private, gated community full of neighbors looking to do their business away from prying eyes. On the same night, their husbands meet up to play poker, where much more is being planned than anyone could guess.

But on this particular night, something goes terribly wrong. When all three men end up dead or hospitalized, and the entire town is being questioned, no one seems to be able to answer the only question that really needs asking: What the hell happened?

This is a riveting story, not just of powerful women or vengeful men, but of secrets, neighbors, blackmail, business gone wrong, and the most intimate of desires spilling into full view.
Read more

E.G. Scott is the pen name of writing partners Elizabeth Keenan and Greg Wands. Together they have written three novels; The Woman Inside, In Case of Emergency, and The Rule of Three. Their first book, The Woman Inside, was an international bestseller, which has been translated into twelve languages and is in development for a television series by Blumhouse. Their novels have been featured in Entertainment Weekly, Buzzfeed, Real Simple, and InStyle. 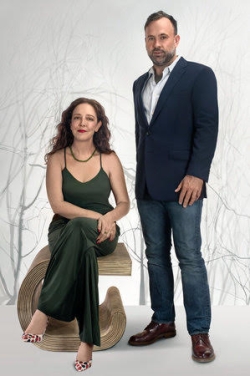 “From its seize-you-by-throat opening to that jack-in-the-box finale, this slick, sleek thriller held me breathless. Psychological suspense at its brightest and boldest.”—A.J. Finn, #1 New York Times bestselling author of The Woman in the Window

“A marital saga so pitch-black it makes Gone Girl look like the romance of the decade... [The Woman Inside] resembles past smashes like Big Little Lies and The Woman in the Window.”—Entertainment Weekly

“This twisted domestic thriller hasn't even hit shelves yet, but it's already being adapted as a TV series by Blumhouse, the producers of Sharp Objects. Told from the perspective of a husband and wife who are the most perfect, and possibly the most dangerous, match for one another, The Woman Inside is a dark tale of secrets, lies, unfaithfulness, and revenge that keeps readers guessing until the very end.” —Bustle

"Utterly gripping from the outset with compelling characters that leap off the page, plenty of twists to keep you guessing and a killer ending. It is so good!"—Jessica Eames, author of Bad Seed